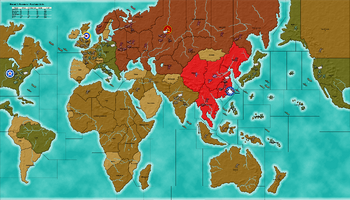 1945B Aggressive Russia is a TripleA scenario that attempts to create a hostile Soviet Union and a newly Communist China (4 years early) taking on the United Kingdom and the United States.

The war is over. Germany has been defeated, but the Great Bear of the East will not rest and demands land in exchange for the blood of its children. Japan is dead as well, so the USA can focus its attention on its new enemy. Russia's only ally is Communist China. (In the original game these were remnant Japanese forces.)