Introduction This map/scenario is a redux of version 1 of the map with the same name. It can only be played with Hard A and has lots of Ancient themed abilities like; • Generals inspiring their units • War Engines shoot first, then archers/slingers, then melee units fight • War Engines are best at destroying Forts, Palisades, spears, warbands • Archers support one close order melee unit • Elephants causing Fear in horses • Cavalry bonus charging infantry • Warbands have a Wild Charge • Spearmen are best at disrupting Cavalry • Forts & palisades reduce the attack of most enemy units • Forts & palisades are units maned by militia and cannot move, even though they have move 1.

Settingthe Scene The Roman Emperor Claudius has sent Ailus Plautius, a distinguished senator, to conquer Britain. He has at his disposal 4 legions of about 20,000 men plus an additional 20,000 auxilia. They are the veteran legions: Legio II Augusta, Legio IX Hispana, Legio XIV Gemina and Legio XX Valeria Victrix. II Augusta is also known to be commanded by the future emperor Vespasian. The Romans are set to invade.

Meanwhile, the Britons are not unified. In the north the Picts and the Caledonians are vying for dominance. In the south the Catuvellauni have displaced the Trinovantes as the most powerful kingdom in south-eastern Britain, taking over the former Trinovantian capital of Cam ulodunum. The Welsh remain quiet in the west. The Brigantes are expanding their power in the centre of Briton conquering weaker neighbours.

Who will dominate and become lord of Britannia, the Romans with their superior training and discipline or one of the wild and warlike native tribes? Let conquest begin.

Main Changes • A builds Palisades and Forts (achieved by terrain effects to stop them from moving) • Not all the 'Celts' can build the same units, they follow their historical units. • Has upkeep/Maintenance • Repointed and rebalanced all of the units • Only 3 rounds of combat • Fixed many territory connections • Has two Victory Conditions, Economic 125pu and 3 out 5 VC • Art: 5 new Celtic Flags, resized smalliVlap, and Roman flag to24x24px, makes the map area bigger

Generals Can raise troops in the territory they own at the start of their turn. They can also build palisades and the Roman can build Forts.

Win Conditions Economic 125pu, optional Projection of Power 3 of the 5 Victory Centres, these are selectable in the Map options menu.

Features • Dice are 6-sided. • Turn sequence, Combat Moves, Non-Combat Moves, Purchases then Placements. • Land, sea battles last up to 3 battle rounds. • Upkeep/maintenance, most units cost I. PU to maintain per turn other units are 0 PU per turn. This dramatically reduces large defensive stacks. • It is a small sized map, with 130+ locations and is intended for; • solo play & 5 Al using Hard Al • can also play 1v2 or 2v2 (with no Romans) with A support or not. • Can Use/not use or AI=Do Nothing, all factions, to learn to play a faction, or any other combination for faster game play.

Notes The Romans start with no income, Claudius does not want to spend any more money. The Romans must capture territory quickly to gain income and rebuild. Remember this is a business venture for the Romans. 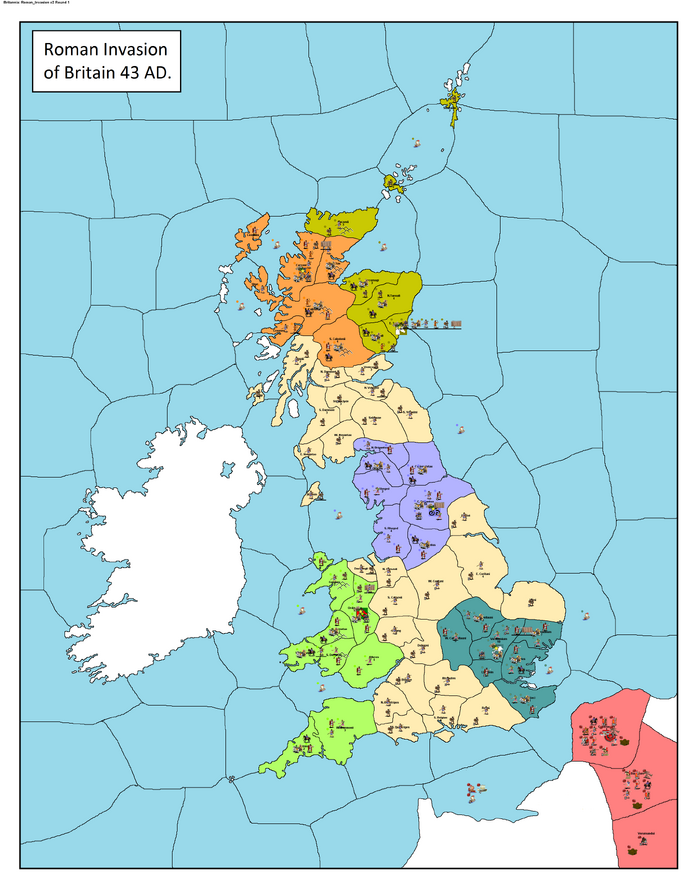