Pact of Steel is an original TripleA module developed as a variant of the 4th edition Axis and Allies rule-set.
Our initial goal was to incorporate Italy as the 6th major power in the game, and along the way to correct some of the imbalances we saw in standard 4th edition. The module represents a hypothetical WW2 scenario, which tries to reproduce what the war might have been like in 1942 had Mussolini been more successful in his early Mediterranean campaigns.

The game functions under a 15 VC set up with Major Victory at 11 VCs captured (the new VCs are Stalingrad,
Sydney and Honolulu.) I think the module is an excellent example of what users can accomplish with tripleA's custom editing tools. A few months ago Pact of Steel was just an interesting 'what-if' scenario, but thanks to the efforts
of the tripleA community we now have an actual game to play. I hope everyone enjoys it.

Russia in the Axis, and Japan is an Ally

Thanks again thanks to all the Devs and playtesters who helped get this project together:
DMA02 (Nekro), Iron Cross, Aibrahim, SGB, KC1189, Zero Pilot, Tactics, Underdog and the whole crew.
You guys all rock! 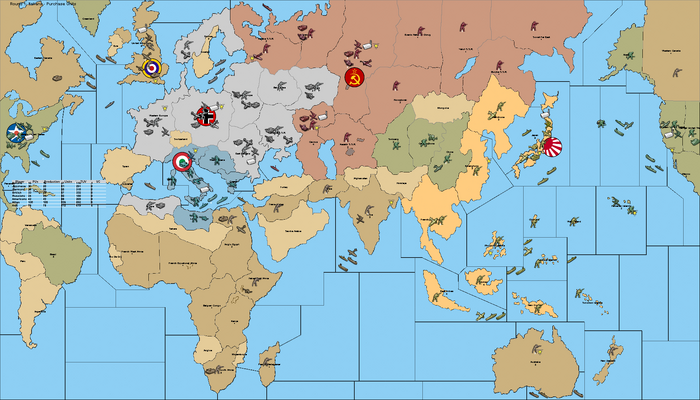